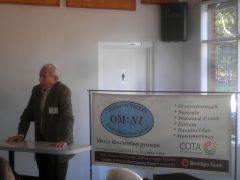 Wednesday 31st July 2013 Eltham OM:NI group hosted a talk and BBQ lunch to which the members from Diamond Creek, Greensborough & Banule groups were cordially invited with an excellent attendance of over 40.
“A Fortunate Life” was presented by John Cohen, a member of Eltham OM:NI group since December 2012 and being retired some 33 years, but by no means inactive, after a distinguished career in education. His talk spanned the years from his birth in Cologne just after WW1 to his arrival in Australia in 1937 and subsequent life events from coming to terms with life in a new country, becoming ” ….you’re a bloody Aussie now!’ and leading to his settlement in Eltham.
His talk was not only entertaining but humorous, informative, absorbing and at times moving, on a life interwoven with hardship, learning, determination and a scattering of good fortune. John spoke to us for nearly 2 hours with an eloquence and simplicity that I doubt any man could have left without a lasting impression and without reflection of his own achievements.
A sincere thanks from Diamond Creek to John and the Eltham OM:NI group for their hospitality.

Sadly on the 18th March 1014, after struggling with illness, John Cohen OAM JP, passed away.

John was a very early and active member of the VLGA (Victorian Legal Governance Association), with a deep and passionate interest in progressive actions, particularly local causes, youth issues and support for people with mental illness. John was a solid and strong supporter of local democracy particularly at times when there were real threats to the capacity of local governments to represent their communities.
John wore a number of hats during his distinguished career including Councillor and Shire President of the former Eltham Council, member of the executive committee for The Council of Christians and Jews (Victoria), council member of the Australian Institute of International Affairs Victoria, chairman for Asian studies for Victoria, headmaster and lecturer.