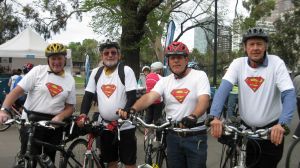 Victorian Seniors Festival 2013 began with Festival Celebration Day on Sunday 6th October so, a group of the Diamond Valley OM:NI superhero cyclists decided to make suitable representation at and, contribution to the event, by joining the ‘Life’s Poker Ride’ organised by Life Activities Clubs of Victoria    http://www.life.org.au

Ken and Nick caught the 8.15am train from Diamond Creek and were joined by Lindsay and Leon at the Eltham station – unfortunately Bruce had done the right thing the night before by setting his clocks forward to daylight savings time but forgot to set his alarm! – had a ‘senior’ moment no doubt. Arriving a Flinders St Station at 9.15am it was decided a good time for coffee, relaxation and a quick resolution to the global problems whilst awaiting the tardy Bruce to catch up, arriving on the next train.
The ride began at 10.30am from the LACVIC tent on the Yarra Bank at Federation Square  the challenge being to ride the Capital City bike trail along the river collecting playing cards at various points on the way and at the end – the best poker hand won.

So, at the start, picking up two cards each, the five heroes set off in the companiable company of another 40 or so riders along the North Bank at a very sedate pace to the Morell bridge. Crossing the bridge to the South Bank, and after picking up more cards at a check point, headed East to McRobertson Bridge.

More cards at another check point and across the bridge back onto the North Bank and back to Federation Square via the Burnley board walk, Birrarung Marr and Princess Walk. Here the cards were handed in and it was decided not to proceed to the casino on South Bank as the best hand the group could come up with was a pair of sixes collected by Lindsay (stay out of the casino and stick to cycling boys!)

After circulating the numerous booths and activities in and around Federation Square – and retrieving Ken from various conversations and encounters as the sky was looking a bit ominous – the plan was to ride back along the Yarra River, find some lunch and coffee and catch a train from Clifton Hill or Fairfield. All went well, with a pleasant following breeze, until the trail turnoff to Clifton Hill was somehow missed! It was then on to uncharted territory along the hilly but scenic Yarra Boulevard – if one had time to catch breath to fully appreciate the panoramas – down to the Chandler Highway and eventually, just in time, to catch a train at Alphington Station.
A good day out – someone said it was supposed to be a ‘fun ride’ – was it?
………………….. of course it was!

4 thoughts on “Riding For The Seniors Festival”