Cooler conditions but a lovely morning as Ken, Bill, Barry & Nick caught the 8.25am train from Diamond Creek to be joined by Lindsay & Bruce at Eltham. It was decided to take a new route &  de-train at Jollimont for cycle down through the “G”, Birrarung Mar, along the North Yarra bank and head for Docklands in order to pick up the Maribyrnong river trail.

The Jollimont disembarkation was largely due to an acute aversion to station escalators that a certain member of the peloton had picked up on a previous ride up the Maribyrnong (* See previous post “Down The Bay Or Up  The Creek).
The ride up the river is certainly picturesque and a lovely part of Melbourne with unexpected, but impressive, sights such as the Buddhist Temple of The Heavenly Queen. 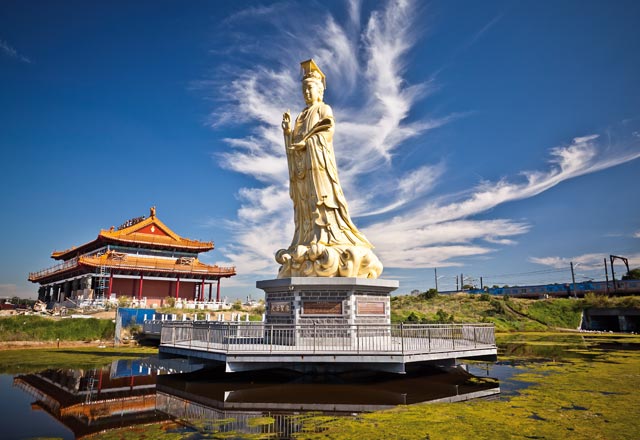 The temple of The Heavenly Queen

The going was not uncomfortable but the boys were glad of double tops and rain jackets (which were later not needed) as they rode into a cool and blustery head wind ( & looking forward to the return).

So it was with great relief to de-bike at Garry Mehigans Boat House restaurant for a convivial half hour coffee break – funny – for some reason the conversation turned to menus, food, TV cooking shows and eating!
The peloton then rode on, in various degrees of ‘blusteriness’ (depending on which way the bend went) up the steep hill to coast at a good speed down the hairpins of Steels Creek Reserve. On hitting the gravel at the bottom Nick, and seeing a soft patch, decided to emulate the snowboard half-pipe competition (he must have been watching too much of the Sochi Olympics) and fortunately managed to stay on two wheels, immediately thinking that it was not a good idea! (stick to cycling).

Steels Creek Reserve with the Maribyrnong River and Department of Defense

The peloton proceeded along the river through Canning Reserve and hitting the road at Cordite Avenue, along Raleigh Road to rejoin the river at The Anglers Tavern. Now was good riding as the day had warmed somewhat and that lovely wind being (mostly) behind made a pleasant trip back to Harbour Town for a late lunch under ‘The Southern Star’ – surprise, surprise – which was actually working!

Harbour Town and The Southern Star

No one was admittedly game to try the station elevators yet so it was a return trip, marred only slightly with the removal of a piece of glass from a back tyre (yet again proving the 90% theory), to the iconic Jollimont Station, and late afternoon return to DC.
All in all a good days ride.

3 thoughts on “Thursday Ride on the Maribyrnong”