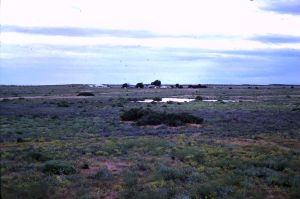 I don’t know if you’ve heard of William Creek in South Australia, or maybe even been there, it’s situated on the Oodnadatta track some 203 km north of Marree,166 km east of Coober Pedy. It claims to be the smallest town in SA with a population of 10-16 (depending on who you talk to) and sits on the world’s largest working cattle station, Anna Creek Station, which has an area of 24,000 square kilometres. The timber and corrugated iron pub claims to date back to 1887 and was on a branch line of the original Ghan railway to Alice Springs until it was re routed west of Coober Pedy in 1980 and extended to Darwin in 2004. We happened to stumble into this dusty backwater (well, not so dusty when we arrived) in 1975 when the population was only 7 – the pub landlord and his wife along with 4 railway gangers who were billeted in an outback accommodation (of sorts) somewhere over from the pub – and I don’t recall who the 7th person was. Apart from the pub and the gangers house there was an airstrip a branchline to the mainline and not much more.

In the spring of 1975 we set off in a Series 3 sw base Land Rover, loaded with camping gear, on a three month journey from Melbourne to discover some of this great country of ours, eventually managing to get half way round it whilst experiencing only a sample of its potential. Our route took us up through central NSW to the Queensland coast at McKay and on northwards to Cape York. We then headed west to Karumba on the Gulf of Carpentaria, Normanton, Mount Isa and eventually to Katherine Gorge in the Northern Territory. We had decided that a visit to Darwin was not a good idea, not only from the fact that we were studiously trying to avoid major cities, but that it was still recovering from the disastrous effects of Cyclone Tracy ten months earlier.

So we turned south down the Stuart Highway and headed for Tennant Creek, the ‘Alice’, Palm Valley, Kings Canyon and Ayres Rock (as it was called then).
The journey down the Stuart was quite amazing as we had hoped to see the ‘Red Centre’ – which turned out to be quite green in many parts. On or left, to the east, was a skyline of smoke and many kilometres of bush fires, whilst to the west and south were great flashes of lightning and black storm clouds delivering deluges to this dry country. As we drove we could see creeks crossing the highway beginning to fill with water as the rain began to supply the dry beds kilometres away and as we arrived at Alice Springs the rain was so hard that we actually sought the refuge of a motel for a change. The resultant effect of the rain was an incredible blooming of the desert almost overnight. Green grasses sprouted, colourful wild flowers bloomed in abundance, paddy melons sprawled across the earth and animal and bird life appeared as from nowhere.

Heading south again we found the road at the South Australian border was not sealed and, as a consequence of all the rain, many sections were washed out necessitating slow and lengthy diversions through the bush. It was in this section that we found a couple of the heavier 4 wheel drives in trouble and gave assistance with our vehicle as an anchor point for their winches and we eventually managed to make it to Coober Pedy intact.

Today turned out to be one of the most taxing, mentally and physically, in which we had to guide Digger ( the pseudonym we hung on the vehicle) over some of the most challenging terrain the country could put in our tracks.
We set off rather late for us at about 9.00am. The day was clear and sunny but the country was bleak and bare. The track quite good – as the police at Coober Pedy had informed us the previous day, but how wrong they were!
Soon the track deteriorated, becoming boggy and waterlogged forcing us to make many detours – we became anxious that we may lose the main track.
Fortunately we kept picking up two tyre tracks which looked reasonabley fresh and assumed that someone else was on the way in front of us – wrong! 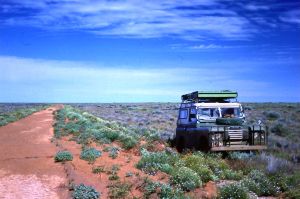 Then around 11.00am, having only travelled 45 km (another 121 km to go), we made a slight miscalculation and became hopelessly bogged right down to the axles. In the middle of nowhere, and no one likely to assist, there was only one thing to do – start digging!!! It took ages in the heat & flies with only a small army type shovel and our bare hands to excavate the sticky red clay. Seeking a bit of dry padding for the wheels the nearest woody sort of ‘bush’ (singular) was about half a kilometre away. Finally at about 1.30pm Digger got traction and out we came like a cork from a bottle (we wished at this point that we did have a bottle!)
On the way again with much detouring and walking ahead to find the best way – then came the creek! Across the track about  100 meters of water and no way round – a bit of a paddle ascertained that it was only a couple of feet deep so, down into low gears, praying the bottom was solid and no deep holes – in we went. It was OK at first until water started seeping in the doors and higher until it was sloshing over the bonnet – and still the other side looked a mile away.
No going back, Diggs revving like mad, our hearts in our mouths and after what seemed like an eternity we finally crawled up the opposite bank onto dry land. We noted that the water birds seemed totally unconscious of our passing.
After pressing on through a couple more creeks we decided it time to stop for lunch and regain whatever was needed to carry on.
Surprise! – two Toyota Landcruisers suddenly came hurtling along the track as though it was a freeway. Turned out to be two station hands from Anna Creek Station who had been to Coober Pedy the previous day for supplies and were returning behind us – they were surprised to see us as no one had been able to make the crossing for over a week. As they knew the land like a book we quickly tagged on behind them feeling much safer with the company – we were still only half way there! 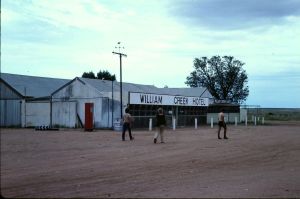 The track thereafter became much better, one more creek crossing and the progress improved remarkably – 60 kmh and more were the norm. The guys knew all the dry routes and short cuts and eventually we left them at the Anna Creek Head Station completing the last 20km on our own to William Creek – and never a more welcome sight was the pub.

About 50 meters from the pub was a low stone memorial sort of construction that was holding a supply of tinnies surrounded by a group of ‘drinkers’ who shouted across that the pub was closed and to come and join them … “G’day” and “Where-the bloody-hell-did-youse-come-from, Mate?” On joining them we were informed that the landlord had his ‘tea’ between 5.00pm and 6.00pm and they had enough liquid supplies to go round until he reopened.

The stone edifice, we discovered, was actually a memorial that they, the ‘locals’, had constructed in memory of a previous landlord who had had the misfortune of fatally crashing his light plane, and served very well as an al-fresco bar.

We were the first people through to William Creek in over a week as the roads had been cut off in all directions by severe flooding so they were quite happy to hear about our day’s drive from Coober Pedy and, very hospitably, shared a very welcome beer with us. It then turned out that the landlord was one of the ‘drinkers’ in the group, having finished his tea at 5.20pm, on hearing of our day’s adventure and to celebrate our arrival he decided to open up early – notwithstanding the fact that stone wall was getting dry. So we all trooped across to the pub…..

I think every bushy, rail ganger, roustabout and station hand from 100 km radius packed in that bar that night, and what a memorable night it was! The bar was cluttered with all sorts of old stuff and from where it came one could only guess, but there was one shelf half way up the back of the bar that was completely empty except for an empty beer can placed in the centre. Whilst engaged in conversation with the landlord, and being quite intrigued by the object, I asked him what was so special about the can?……

…………. he proudly replied “ That was the one Slim Dusty drank out of when he called by one day.” 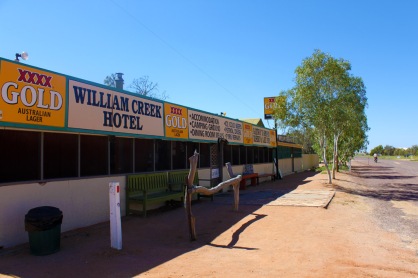 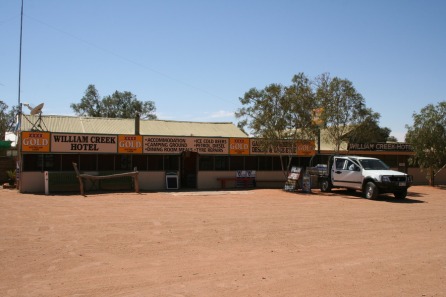 *** As a footnote, our next destination was to be Lake Eyre but we were to be delayed in William Creek for 3 days ….. but that’s another story. 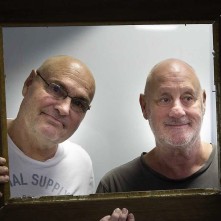