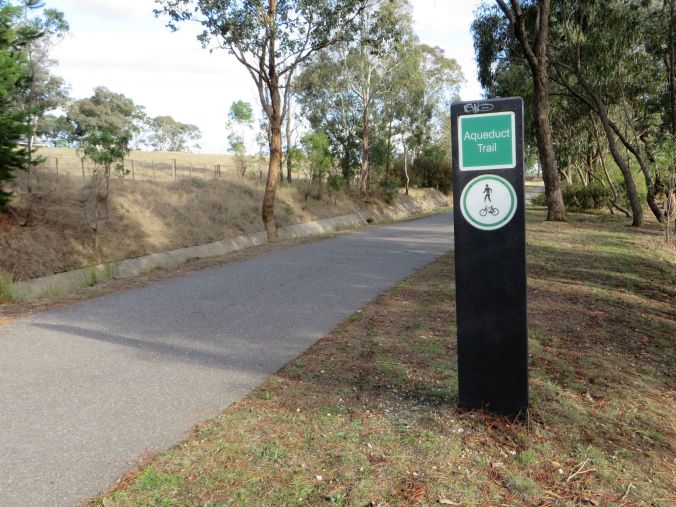 Having the residue of a heavy cold I decided today to decline the company of the peloton and stay abed for most of the morning in an attempt to get rid of it – notwithstanding the 4*C temperature at 8.00am and the predicted rain – which, in keeping with general Thursday forecasts, didn’t eventuate – thankfully, I thought to have a lazy day.
By mid morning I was up and feeling quite agitated about the fact that I really should be doing something – and the legs were telling me, loudly, that they needed stretching. The day had warmed up somewhat and donning four top layers, in deference to a wheezy chest, I headed for the shed to break out the bike, which I thought had lain idle (like me) for long enough, and struck out for the track.
The riding conditions were pleasant and 10.30am on the track seemed to be dog walking time with many and varying breeds of pooches out on the leash exercising their owners for the day. The plan was to head through Eltham towards Heidelberg in the chance of meeting the boys on their way back from coffee – on the assumption that was their original destination. Turned out that I met half the peloton in the forms of Leon, Lyndsay & Brent just before the Eltham lower park – the rest of the group having opted to push on to Fairfield – or somewhere else?
After returning to Eltham with the three fellow Omnicyclists I left them after our usual chat at the station and decided to head up Main Road to Research and return to Dimo via the Aqueduct trail. This is a rather pleasant ride, especially as up to Research is a lengthy but fairly gentle upward slope which lets the legs know they are working, but not painfully so, and on reaching the top it’s pretty much a down hill run all the way. You get on that part of the trail about a quarter kilometer north of Eltham Little Theatre (a short but “challenging” incline) and from there an approx 4km ride gets you back to the Diamond Creek Trail at Allendale Road.

This section of the old aqueduct runs from Research to the old syphon on Allendale road Diamond Creek.

The construction of what was known then as Watts’s River Water Supply commenced in August 1885 to bring an adequate supply of fresh water to the bourgeoning, but apparently polluted, Melbourne City. Less than six years later, in February 1891, it was in full operation and renamed as the Maroondah Aqueduct.

Melbourne appointed a J. Hugh Davies, of the Railways Department, to locate a suitable catchment and cost of ducting a water supply to the city. He chose the Watts River at Healsville and commenced a survey to create an open channel through the hills delivering water to the Melbourne City holding reservoirs in Preston. This is presumably the origin of the suburb called Reservoir, situated just North of Preston.

William Davison, a Melbourne Supply engineer, designed and directed the project which was to become one of the three major water distribution facilities at the time, along with the O’Shannassy and Yan Yean projects. It was 66 km long of which 41 km were constructed of open brick and cement lined channels and pipes with a fall of 1 foot (30cm) per mile (1.6 km), 10 km of tunnels and 15 km of inverted siphons to carry the water over creeks and valleys.

Wrought iron pipes at Allendale Road – used for the siphons

Interestingly, at the time, there were 900,000 residents of Melbourne and the cost of the project was 800,000 pounds – less than one pound per resident. 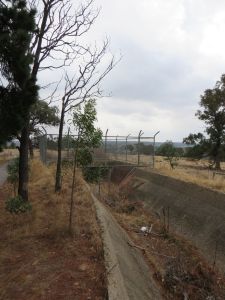 The siphon at Allendale Road which would have channeled the water over to St.Helena

I think this rather remarkable piece of historical engineering is probably quite unknown to the greater part of the Melbourne population and it’s fortunate that some sections of the original 66Km remain intact – albeit some parts have been used for conveniently dumping rubbish by the lesser concerned citizens of our region. It’s also fascinating to reflect that it was actually completed in 6 years and all the work carried out without the assistance of modern-day machinery.
For anyone who would like further reading on the subject the following web site by Bob Padula contains much information, maps and photographs, old and new, of this project that most certainly played a major part in development of the great city that Melbourne has become today.

3 thoughts on “A Thursday ride on the Aqueduct Trail”