We stayed a week in Townsville and absolutely loved it. It is a city of approx. 190,000, but is easy to navigate, and does not suffer from “peak hour traffic”. The best feature is a 2.5km beachfront Strand, that is wide as well, beautifully grassed and lovely tropical plants providing shade and colour. It is also interspersed with features like an ice-cream parlour, a kids playground with the normal collection (swings, slides, climbing things, flying fox etc), a massive rock pool with sandy shore, grassy slopes, covered  tables & chairs, free bbq’s etc, a practice basketball court, the landing area for the tandem skydive adventure, and others I have overlooked. On the other side of the road is low rise tourist accommodation and a good selection of alfresco eateries taking advantage of the balmy tropical climate. 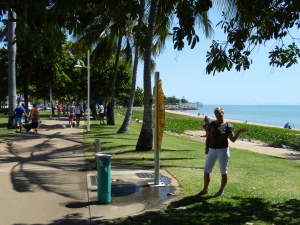 Rock Pool on The Strand

We were lucky – ????? – to arrive on a Saturday, and of course the Flinders St (city centre) “Market” was on Sunday. Denni was up early and eager, so off we went. It turned out to be really good, as it was combined with a farmers market, with all sorts of local produce. We weakened for a super-sweet pineapple. A long section of Flinders St was cordoned off creating a mall effect and it worked really well. They also had a biodynamic coffee shop – yep bio beans and bio milk, and it was sensational. Denni picked up a great pair of pants as well.

We went up to Paluma NP for a day, and enjoyed waterfalls, rainforest, potential future free-camps, remote deserted roads – tracks, a reservoir and long talk to the NP Ranger. This is way off the beaten track, but so enriching. 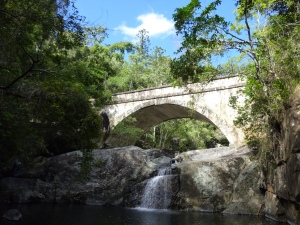 Another day trip took us to the northern beaches, and we were really taken with Balgal Beach, again a future free-camp destination for a few days. The concept of endless beach walks is always inviting.

Castle Hill Lookout is a Townsville icon, with lots of local runners challenging the climb. The summit gives 360 degree views of Townsville from numerous lookout points.

The Aquarium has the only live coral reef experience in Aus, so was well worth a visit. The regular guided tours of the various exhibits were well worthwhile, as the experienced guides take you to the best places with the best commentary. And a trip to the Maratime Museum at Kissing Point, and the associated indigenous boardwalk were sensational. The Kissing Point Fort told more of the untold chapters in our military history. We had 1 hour instead of 1 day here.

Original 1880’s cannon mounted on the cliff above the Military Museum.

A day trip to Magnetic Island was sensational with all that crystal clear water and sandy beaches that we expected. What I didn’t expect was the substantial permanent population on the Island, re-enforced by the ferry load of school kids coming across as we waited for our ferry back.

Lots of other little pleasures in Townsville made it a fantastic stay.

Reluctantly we moved on to Alva Beach for 3 days.

I now confess to our “game-plan”. We are on a mission to explore most beachside locations between Innisfail and Rockhampton in an endeavour to find a spot we may wish to stay for months rather than days, in the future. We know we can’t tour at a frenetic pace forever, so need some “safe spots” to prop for a longer time in the future at reasonable cost.

Kurrimine Beach has already been stored as one such place, the only downside was no sea swimming due to occasional croc sightings. Alva Beach ticked all the boxes of a quiet, small getaway, climate perfect, CP perfect, BUT north Queensland beaches are generally vey tidal with big mudflats at low tide, and this was a prime example. The fishing was to die for, the CP was idyllic, BUT a boat and quad bike were mandatory………..so we move on.

To Bowen, with the rich river delta where much of Australia’s tomatoes and capsicums are grown. It has a romantic reputation, but in reality it has two sides to it. The entrance and city centre are old, dry, tired, and the site for the shooting of Australia, the movie.

Land site where the land set for “Australia” was filmed. Pub in the background also used in filming.

We often judge a place by the number of empty shops, and Bowen scores highly. It does have fantastic fishing and fish outlets, so we enjoyed fresh fish every second night, and prawns for lunch a couple of times. Bowen also has a beach side where the better to do enjoy sandy, but less tidal beaches, no mud flats, clear turquoise water, and palm lined esplanades. It is a picture perfect area, and with the Great Barrier Reef fringing along this part of the coast, snorkelling over colourful live coral and tropical fish at play can be done from the beach. So Bowen ticks many of the boxes but falls down on smaller getaway, and fails miserably on affordability. I enquired at one CP at Horseshoe Bay, and it is fully booked May to August at $47/ night for the first month and $37 thereafter…….but you can go on a wait list for cancellations……ouch!!!

So we kept going south to the famous Whitsunday region, and camped at Midge Point, about 20km south of Proserpine, gateway to Airlie Beach and Shute Harbour. Airlie Beach was all we expected – magnificent Marinas filled with even more magnificent boats from “modest” to ridiculously “opulent”. Our question was what so many boats are doing in harbour when this magnificent coastline is beckoning just metres away. The Island Archipelago is so close, and the waters so turquoise – crystal clear. European backpackers seem to make up most of the population and we can understand why from previous experience on the French and Italian Riviera’s – they are at home in a fantastic climate, eating, drinking, “being friendly”, etc.

From Midge Point, we also did a day trip to Hydeaway Bay and nearby Dingo Beach. They are 2 other spots on the Airlie Beach peninsula, but around 40km away from Airlie, and both just settlements. Hydeaway Bay had a CP and Dingo Beach a pub. Now we have found a spot that nearly ticks all of the boxes with quiet CP (but with limited shade and a good walk to the beach), sheltered deep-water beaches excellent for swimming and walking, and reputedly excellent fishing. The competition is hotting up!!!!!!!!!!!! 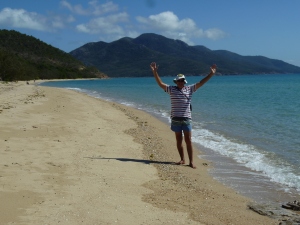 From Midge Point we had another short drive to Mackay for a 4 night stopover. Mackay is a very sprawling city, and not easy to navigate around. It was generally underwhelming, but we are pleased to have explored it. Nearby beaches were all very tidal, and exposed to blustery on-shore winds most of the time. We did however uncover 3 unexpected highlights. The first was a day trip to Eungella NP, about 80km west of Mackay. Both the rain forested NP and nearby Finch-Hatton Gorge were sensational. The Gorge was a modest waterway over granite rocks, with several lovely swimming waterholes up the 3km of gorge you can scramble up. However in the wet we were told it was a fearsome raging torrent. 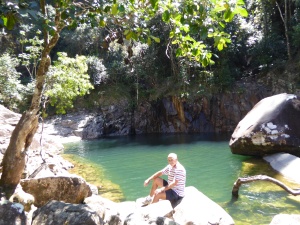 The second was the Hay Point Coal Terminal out from Sarina. Wow this is huge, with black coal railed in from a heap of mines out in the Bowen Basin, from as far away as 300km. 8000 tonnes a load on the 2km long trains, 300million tonnes pa shipped out from the 5 ship loading terminal!!!!!!!!!!!!! 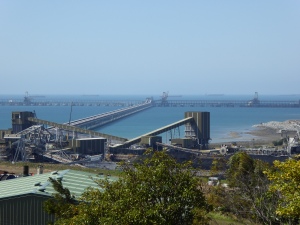 The third rivals for the best future spot competition. It is Cape Hillsborough, a CP on a Cape around 50km north of Mackay. Sensational shady CP perched on a rise above a picture perfect, sheltered bay. Safe swimming, good walking, fishing unknown, but most tenants had tinnies, and the adjacent launching ramp (beach) had lots of customers.

On our way to Emerald we noticed parking bays on each side of the highway at about 5km intervals and couldn’t really see why. Then were told (ushered) into one of these parking bays by a pilot car, and several police vehicles with all lights blazing – there were two 9m wide mining loaders on the back of massive semi’s approaching. Yep, that’s why they have them bays!!!! 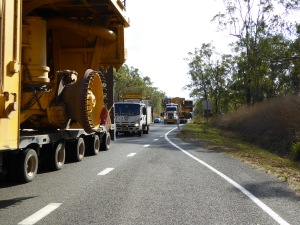 We are in Emerald for 2 nights now, then off to Rubyvale for 2 tomorrow, the 2 long drives free-camping before a night at Moree and a soak in the thermal springs. Three nights in Warrumbungle NP near Coonabarabran, then the dash back to Melbourne on October 3. So over and out followers from the Jacko’s.