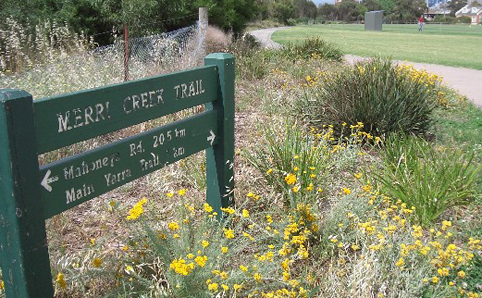 The OM:NIcycle boys certainly were “up the creek” last Thursday ride – in more ways than one!
Being Seniors Week it was decided to take advantage of the free transport and catch the train to Clifton Hill for a ride, much talked about, but never yet attempted by the group.

So a lovely but cool morning start saw Bill, Bruce, Lou, Lindsay & Nick head out from Clifton Hill Station towards the Merri Creek Trail which would take them north through Fitzroy Nth., Northcote, Coburg and eventually to the Metropolitan ring road at Campbelfield. After a bit of a confused start and a small diversion to Lindsay’s old stamping ground, the boys hit the first detour in the form of some guys having shut off an on ramp to the trail to carry out questionable alterations to the environment. 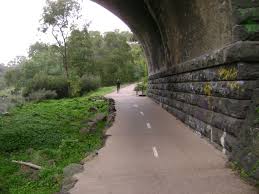 The trail could be clearly seen from above but it took some time to explore a possible way onto it – after that it was plain sailing (or more correctly riding), the day was improving and the scenery quite picturesque, showing lots of spring greenery. Plenty of interest on the way including the Northcote velodrome (no – the boys didn’t try it out), Russian Orthodox churches, a market garden or two with much envied soil (nothing like it in the Nillumbik Shire) and Coburg lake. It was quite amazing to see so much open country in the area and also so many tracks and trails, finished and unfinished – not too well signed resulting in many stops and discussions as to the best route to take. Needless to say everyone had an opinion, but eventually after about 20km they made it to tha ring road. 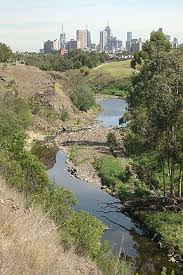 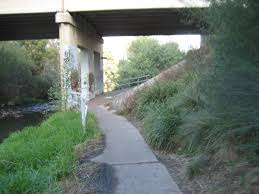 Next problem – to go back the same way or to ride up the ring road and down the Darebin Creek Trail – Darebin Creek won out with a promise of coffee at Bundoora Golf Club. 3 km along the MRR on the north side, and where is that turnoff for Darebin Creek trail??? OK, so a bit lost again – didn’t faze the boys as they were enjoying the day’s challenge – took to the main roads at High Street Thomastown and braving the Thursday roundabout traffic (thankfully with great success) turned on to Settlement road and finally discovered the “Lunch Box” for a well-earned coffee break – not bad coffee either.
Getting on to the Darebin Creek trail was still proving to be elusive but the way took them over some (surprisingly) open (and steep) parklands ending in a gentle downhill cruise through Bundoora Park and eventually finding the trail somewhere at the southern end of it. Great riding from here onwards, but of course a few more route decisions had to be thrashed out and Bruce just had to get lost one more time (we think just to prove he was better at it than the rest of the peloton!). It was actually a great ride, around 40km on a perfect cycling day, interesting and surprisingly scenic, considering the middle of a large city, and terminating at Alphington Station just in time to catch a Hustbridge train home.
Rated – four stars ****