Council On The Ageing

I was looking at the wicking boxes of free vegetables growing at the station platform. It was trying to rain as the silver train slowly stopped to pick up more commuters heading to the mysteries of Melbourne. Ken and I said goodbye to David as he went to do battle with Centrelink in Greensborough and we continued on to the big smoke. It was now a typical scene on the train with computers, iPhone’s and not a newspaper to be seen and as we chatted we felt like aliens among robots.

Arriving at Flagstaff  Station at about 9-30, a bit early, we walked down a cobblestone lane way to view a blue-stone building wall and to our amazement there were several two tone brown Sparrows waiting to dive down and check out the menu in the open rubbish bins, there was a man sitting there also, with his shoes off, eating some kitchen offerings. Back into Lonsdale St and up to level 4 a different world, clean bright and cheery faces of all the invitees to Cota’s Volunteer’s Morning Tea.

What a very impressive attendance of mixed cultures and volunteers both men and women who support all those aged in need of direction. Cota knits many services together and helps the aged in their golden years. A 100-year-old man gave a heartfelt speech and support for both Cota and OM:NI. After the awards and speech’s Cota put on a wonderful morning tea enjoyed by all and networking was further fertilized among Melbourne and Geelong volunteers.

Leaving, we stopped for a while in Lonsdale St, amazed at the variety of people’s dress from Barristers wigs and all, office attire, workers, shoppers and a homeless man huddled under a thin blanket with a skinny dog shivering from cold and hunger – a street displaying the wealthy and the homeless.

Like two rabbits heading for home we scurried down the staircases of Flagstaff  Rail Station and boarded the Eltham train, you never know who you may meet on a long silver train, it’s very random which carriage you get into and who you sit next too but a smile can engage the most amazing encounter and enter Olaf, an amazing young man with technical skills and a great personality in conversation we found he lived at the end of the same street as Ken in the same suburb!

Arriving back home I felt so humble, a warm home a welcome from my wife, cat and a comfy lounge chair to sink back into reminisce over the day’s experience and watch the log fire turn into red embers as I slipped into a welcome warm slumber time. 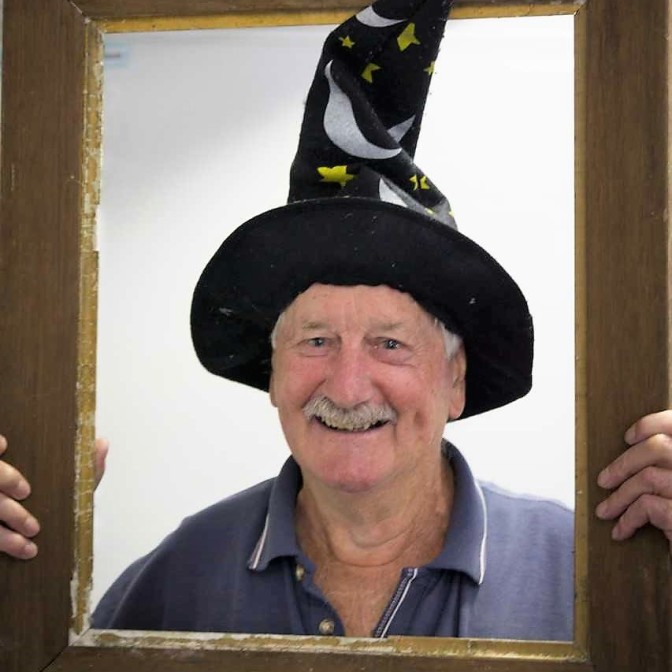